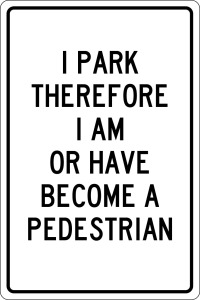 Originally when I was writing the project proposal I wrote a few sample poems to illustrate the concept. And later I used some of those and more, to give poets who wanted to submit a poem or poems an idea of how many words would fit on a sign, and really just to get the creative ball rolling. This was the first poem, and the one I had silk-screened to use for sample installations. It was not one of the final selected poems.